[Disclaimer: this is a non-commercial information/tribute page, with no intention to rip anyone off.] 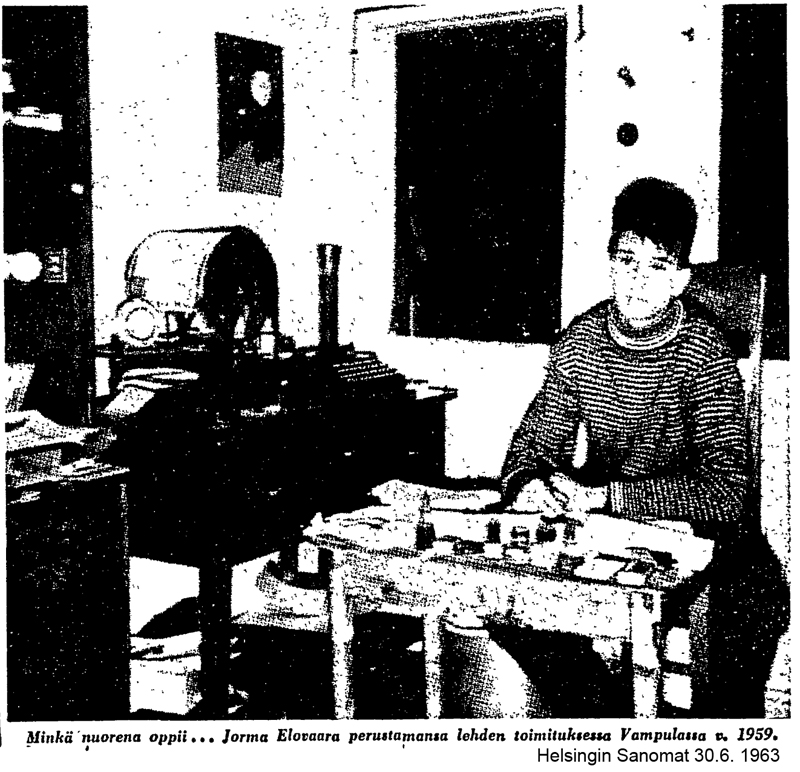 Jorma Elovaara was born on the 17th of March, 1946. He was only 13 years old, when he started his own photocopied magazine called Vili, the "leading news journal in Vampula", a small municipality in the province of Western Finland (now part of Huittinen) where he lived those days. 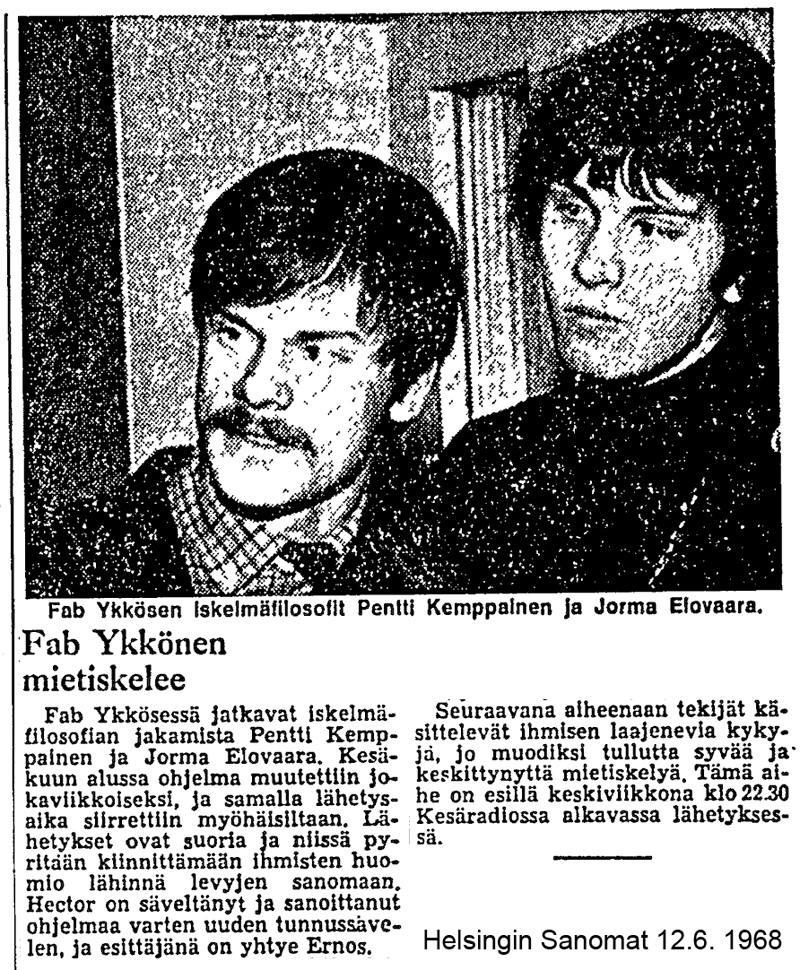 Elovaara was a bit older in 1965, when he initiated with Pentti Kemppainen their own radio show Fab Ykkönen ("Fab One") for YLE, the Finnish Broadcasting Company. Influenced by Swedish Radio's pop programmes, Fab Ykkönen would go as far as to have in-depth analysis on the social aspects of pop songs of the day. (Elovaara and Kemppainen had already illicitly broadcast with their own pirate radio in Vampula, called Radio Troyan [sic].)

Jorma Elovaara's interest in the occult is said to have started with The Hollies' song 'Try It'. Those days a popular British chart pop act, The Hollies were interviewed for Fab Ykkönen, where they cited such literary influences as Lobsang Rampa (in fact, an Englishman), the controversial author of the cult book on Tibetan mysticism, The Third Eye. In a May 2009 interview at the Helsinki student magazine Ylioppilaslehti Elovaara himself clarified that his interest in the paranormal stretches back to 1952, when he spotted a story on flying saucers in Seura magazine.

In September 1969 Jorma Elovaara started his best-known and now-legendary radio show for YLE, called Vesimiehen aika ("The Age of Aquarius"). The monthly show lasted until May 1971, when it was cancelled by the powers that be, as "uninformative". The topics were occultism, UFOs, parapsychology, hippie counter-culture and anything else of that ilk. Hector was also involved with the show, producing about half of its final season. A barrage of sound effects were used to pepper the outlandish subjects there, and popular psychedelic and progessive rock bands of the era were in heavy rotation in the show. Later on, the episodes of Vesimiehen Aika were sold as C-cassettes and its scripts as Jorma Elovaara's book of the same title.

After Vesimiehen Aika was cancelled, Elovaara launched an officially registered society and publication house called Mysteeni, with a series of books on themes as above. Mysteeni also started to publish in 1971 a mystical and psychedelic counterculture magazine called Tähti ("The Star"). Elovaara had already stirred controversy, when he had edited a student magazine called Valkolakki, with some thorough info also on psychedelic drugs, a hot topic of those days of the late 60s and early 70s.

Mysteeni's office was situated in Mikonkatu 11, Helsinki, fully capacitated with its own print press. In time such people would be involved with Tähti and Mysteeni as Kyösti "Oso" Laakso, the comic book artist Kari Sipilä, Olli and Tuula Heima, Risto Moberg, Veijo Michelsson, Jarmo Salas, Keijo Tanttu, Keijo Mähönen, Sam Hancock and Olli Ruoho; also many others who would rather remain unnamed. Also such "anarchists" as Veikko Leväaho and Juha Olavinen were hanging on the fringe. There was also a sister magazine called Loimu ("The Flame").

By today's standards Tähti would be just a fanzine, and a crude one at that: the layouts were amateurish, the texts themselves by a motley crew of contributors often sloppily written and confused; colour separations of photographs were usually not too successful. The same would apply to Mysteeni's books, such as the ones by a "social realist" Yrjö Koivukari (1901 - 1979), who was already in his 70s in the time of publication. Still, the whole affair was an apparent labour of love. Tähti was a member of the international Underground Press Syndicate and Alternative Press Syndicate, publishing stories from the newly-founded High Times magazine, Robert Anton Wilson, some short stories by Edgar Allan Poe, record reviews, readers' letters and so on. Tähti magazine's pages were often flourished by photographs of the shirtless long-haired skinny young men in jeans and "Hai" rubber boots (a popular fashion accessory in Finland of those days).

Tähti and Mysteeni Society would also have their share of trouble, when some claims were started that the magazine was spreading pro-drugs propaganda, and police would be contacted by the concerned parents of a 17-year old girl who worked for Mysteeni and resided at its headquarters (which was, in fact, by that time a small commune). There would be accusations of vagrancy and the exploitation of "slave labour" of minors...

Elovaara formed Syndicate Press Oy Ltd. after this incident, the company replacing Mysteeni as the publisher of Tähti. The magazine lasted until 1978. In the 1980s Elovaara continued with Vesimiehen Aika and Sininen Rapsodia shows at Helsinki's Radio City station, embracing also the nascent techno music culture. Kummitus etsii ystävää ("A ghost seeks for a friend") is a 1986 collection of transcripts from Elovaara's radio shows for City.

Elovaara was also one of the founder members of SETA (Finnish society for sexual equality) in the late 1960s.

Jorma Elovaara died after a short period of illness on his 73rd birthday, 17 March 2019.